If you're even slightly security- or privacy-conscious, which in the present era of Big Data and tech oligarchs is a provident predilection, you should, if not already, be using a VPN (Virtual Private Network). And I don't mean one of the oft-advertised commercial offerings you see plastered about social media—but one that you control. Where every outgoing request that leaves your computer is tunneled through an encrypted private network owned and operated by you. Fortunately, the OpenBSD base tools make this a trivial task—and free if you already have a VPS. But even provisioning a new VM will likely be cheaper than the aforementioned commercial alternatives, with the added benefit of being more secure, and not only private in name but in practice; you can rest assured that only you and the endpoint will be cognizant of your traffic.

The following guide assumes you have a VPS running OpenBSD 6.6, but has also been tested on 6.5, 6.4, 6.3, and 6.2. If you don't already have a server, I highly recommend OpenBSD Amsterdam where a VM can be purchased for €60/year, and comes with OpenBSD preinstalled ready to go. Alternatively, Vultr also provides fast and reliable instances with OpenBSD images for US$5/month.

This L2TP over IPSec configuration uses the IKEv1 and IPSec protocols to establish a tunnel for encrypted traffic between the client and server. This requires the isakmpd keying and npppd tunneling daemons, which can be enabled with rcctl as a privileged user.

Before configuring these daemons, the system needs some tweaking to facilitate the intended use case.

In order for the machine to act as a VPN gateway and perform traffic routing so that packets can travel between network interfaces, IP forwarding and PPP frame handling need to be enabled to forward IP packets in-kernel. In addition, if the VPS is on a slow link but isn't resource constrained, consider enabling the IP Compression Protocol (IPComp) to reduce datagram size and allow higher throughput. To make these changes persistent across reboots, add the following to /etc/sysctl.conf.

If there's no intent to use IPv6 or the node doesn't have limited bandwidth, omit the inet6.ip6 and inet.ipcomp lines, respectively.

Activate these changes now, by executing the following one liner as a privileged user:

Alternatively, two at a time:

With the system setup and requisite services enabled for IPSec, it's now time to configure the VPN.

To setup a tunnel with a pre-shared key for authentication, isakmpd needs to be configured by adding a few simple lines to /etc/ipsec.conf. Substitute SECRETKEY for the desired pre-shared key, which will need to be provided by all connecting clients.

Due to the sensitive nature of its contents, ipsec requires that ipsec.conf is neither group nor world read/writable; so lock down permissions to root only access. Then parse the file to verify it's syntactically correct.

The ipsec.conf(5) man page comprehensively explains the file format and possible values, which can depend on the connecting client. The above values are applicable to macOS and iOS clients, which require the modp1024 security group. Apart from that and the passive mode, which instructs isakmpd to wait for connection requests, the default options are used. Consult the man page and official documentation for settings suitable to other peers.

User authentication to the VPN is handled by the new Point-to-Point Protocol daemon npppd. Granting access to individual users requires adding two lines for each user to the /etc/npppd/npppd-users file; for example, to add users johnnyb and tommyg with the passwords twogoatsonewolf and onegoatnone, respectively:

Note that all users will need to provide the abovementioned pre-shared key detailed in the ipsec.conf file, and their unique password listed in the npppd-users file.

That's the extent of configuration for the services managing authentication and packet forwarding of the virtual private network. Changes can be made to npppd by editing /etc/npppd/npppd.conf, and the npppd.conf(5) man page is a concise resource for configuring the PPP daemon. For this particular use case, however, the defaults suffice; a pppx(4) interface and an IP address in the 10.0.0.0/24 subnet is allocated for each session.

With the VPN now configured, all that remains server side is reconfiguring pf to allow IPSec connections and packet forwarding, and handle the network address translation of VPN traffic across disparate address spaces. The following /etc/pf.conf provides a minimal configuration to satisfy these requirements (with only rules pertinent to the VPN shown).

Before reloading the new ruleset, verify the syntax is valid.

With pf reconfigured and reloaded, it's time to start all the daemons.

OpenBSD's rcctl makes this a cinch, and having previously enabled and configured the requisite services, they should now start without complaint.

Now that the VPN is up and running, switch over to the macOS client for some basic configuration before connecting.

This can be done entirely through the Network GUI in macOS System Preferences. 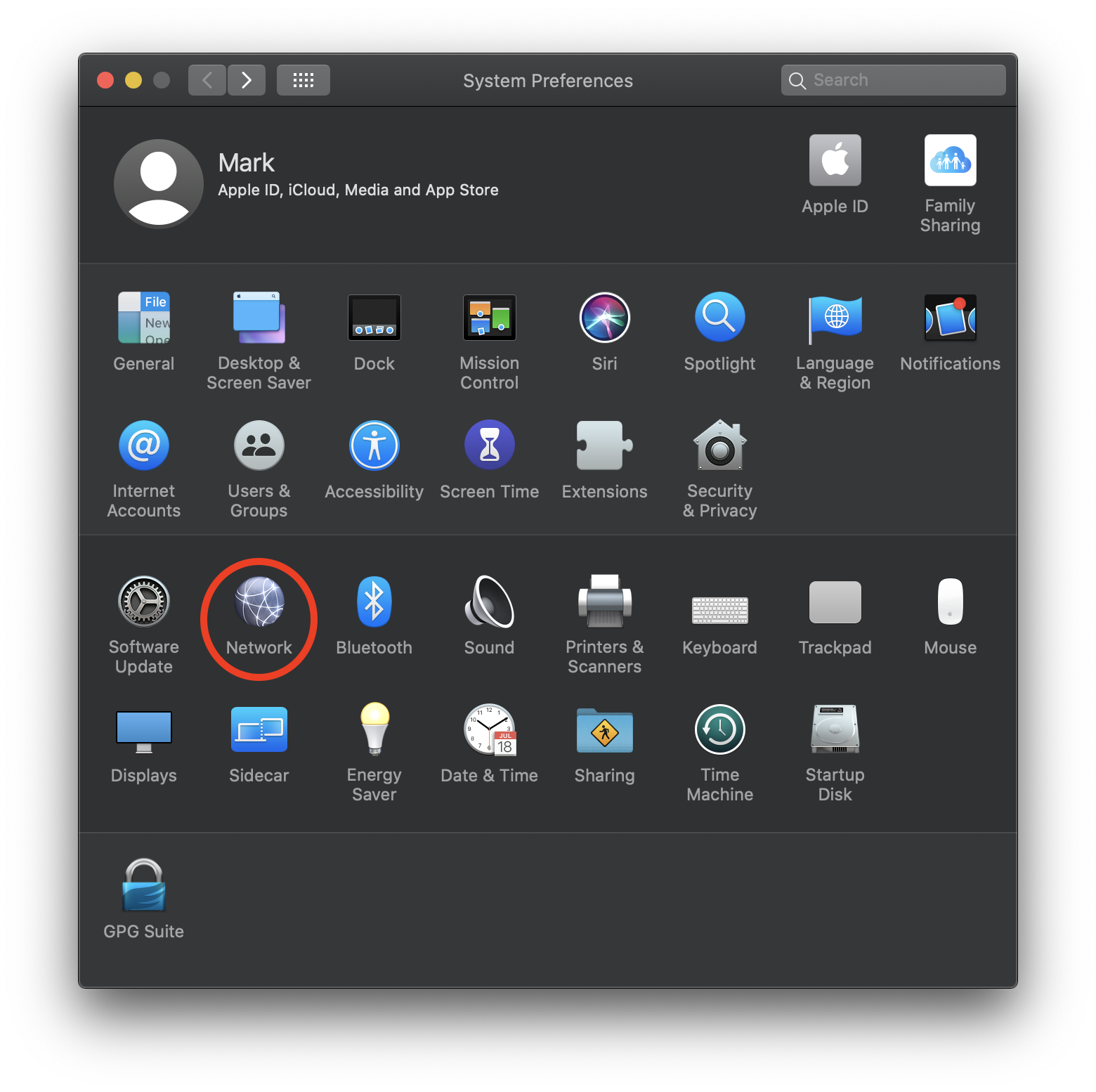 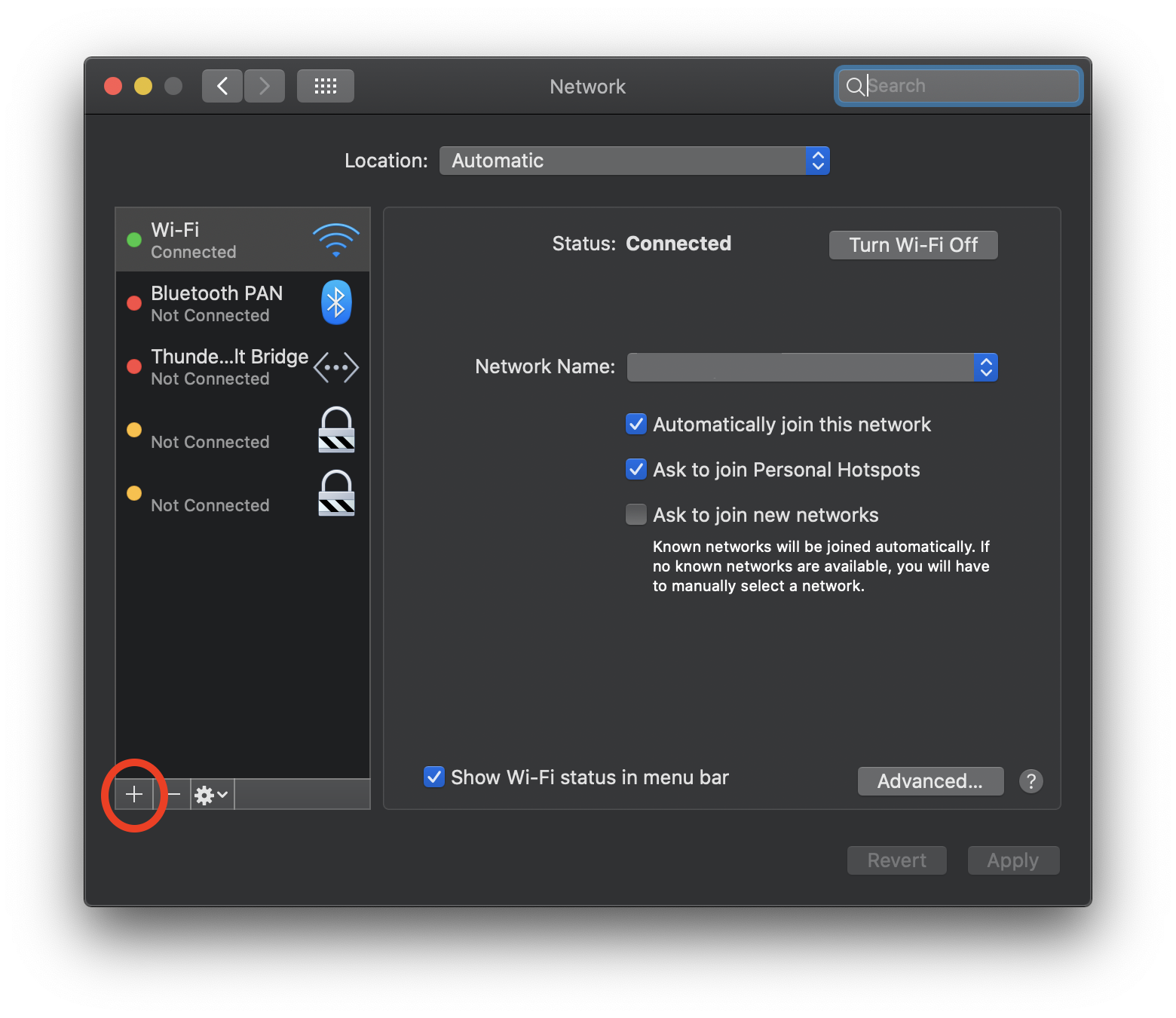 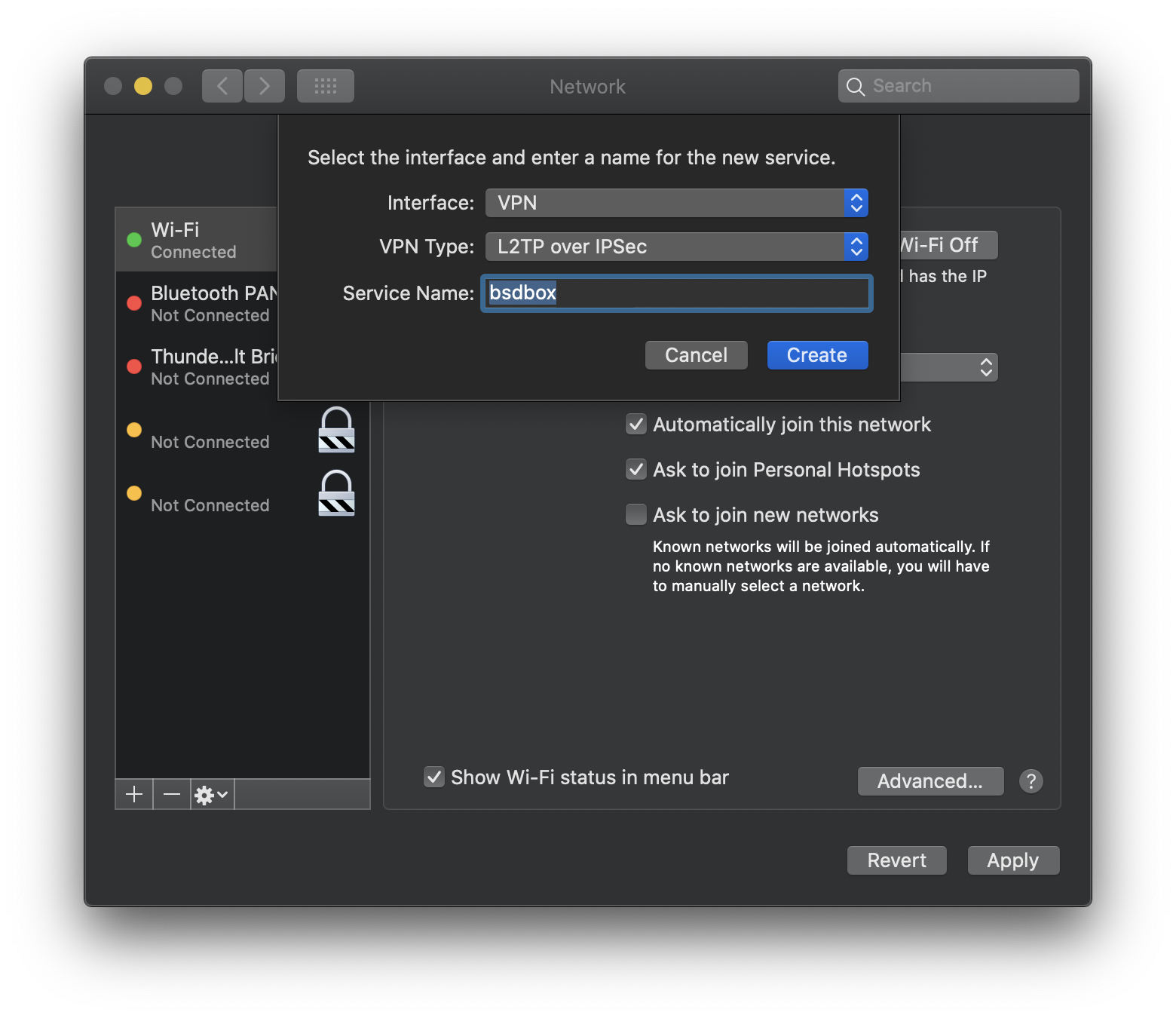 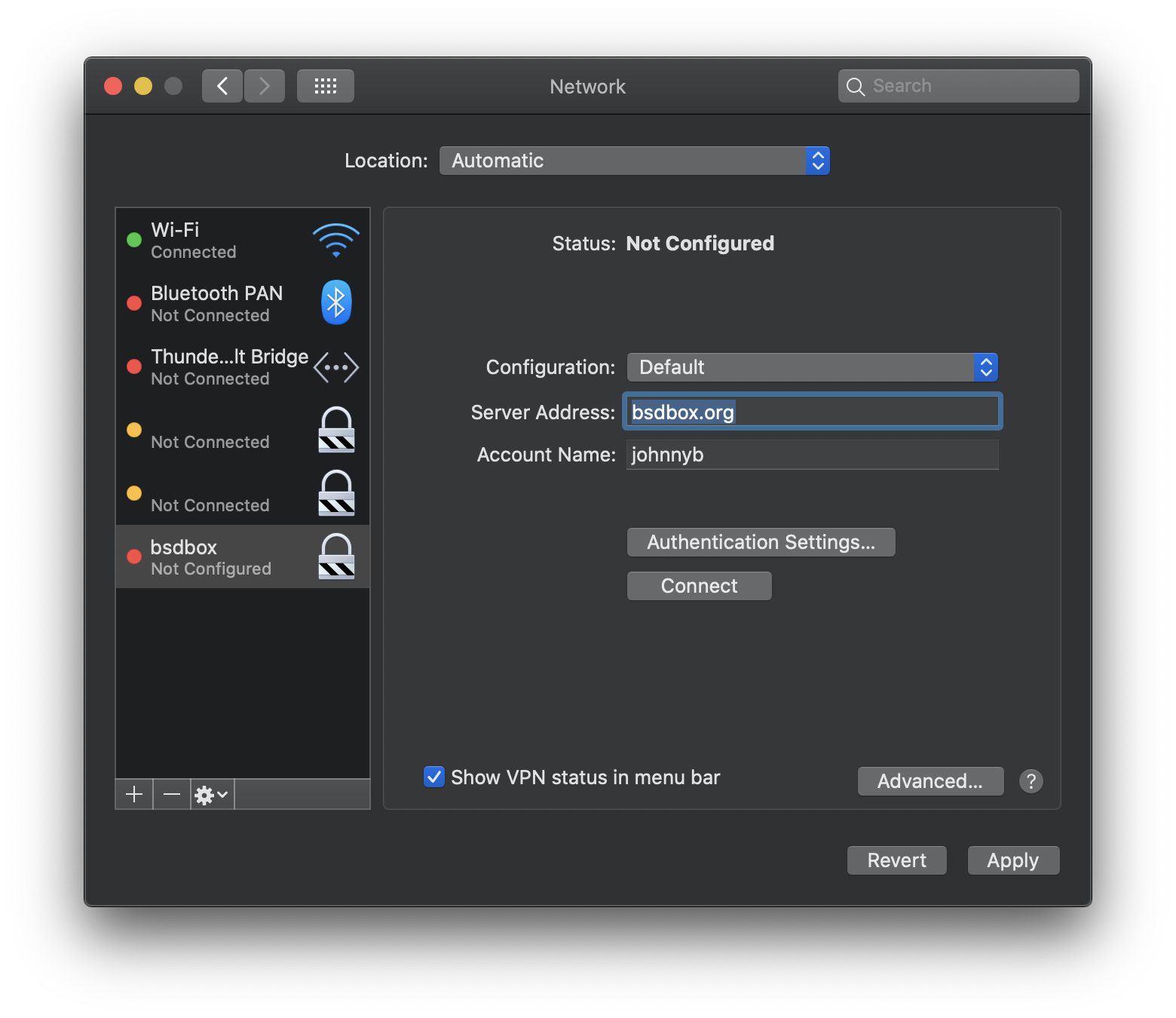 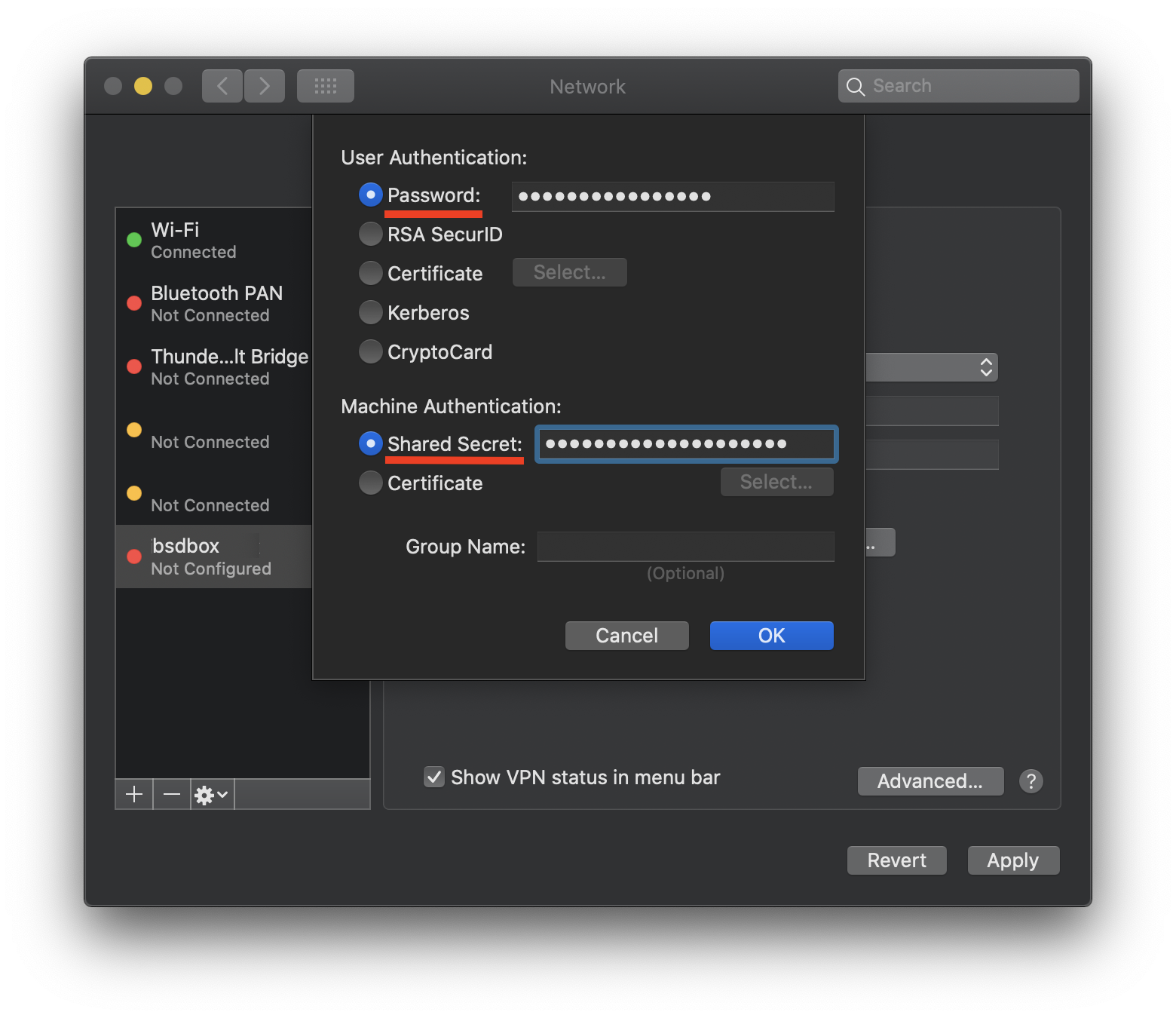 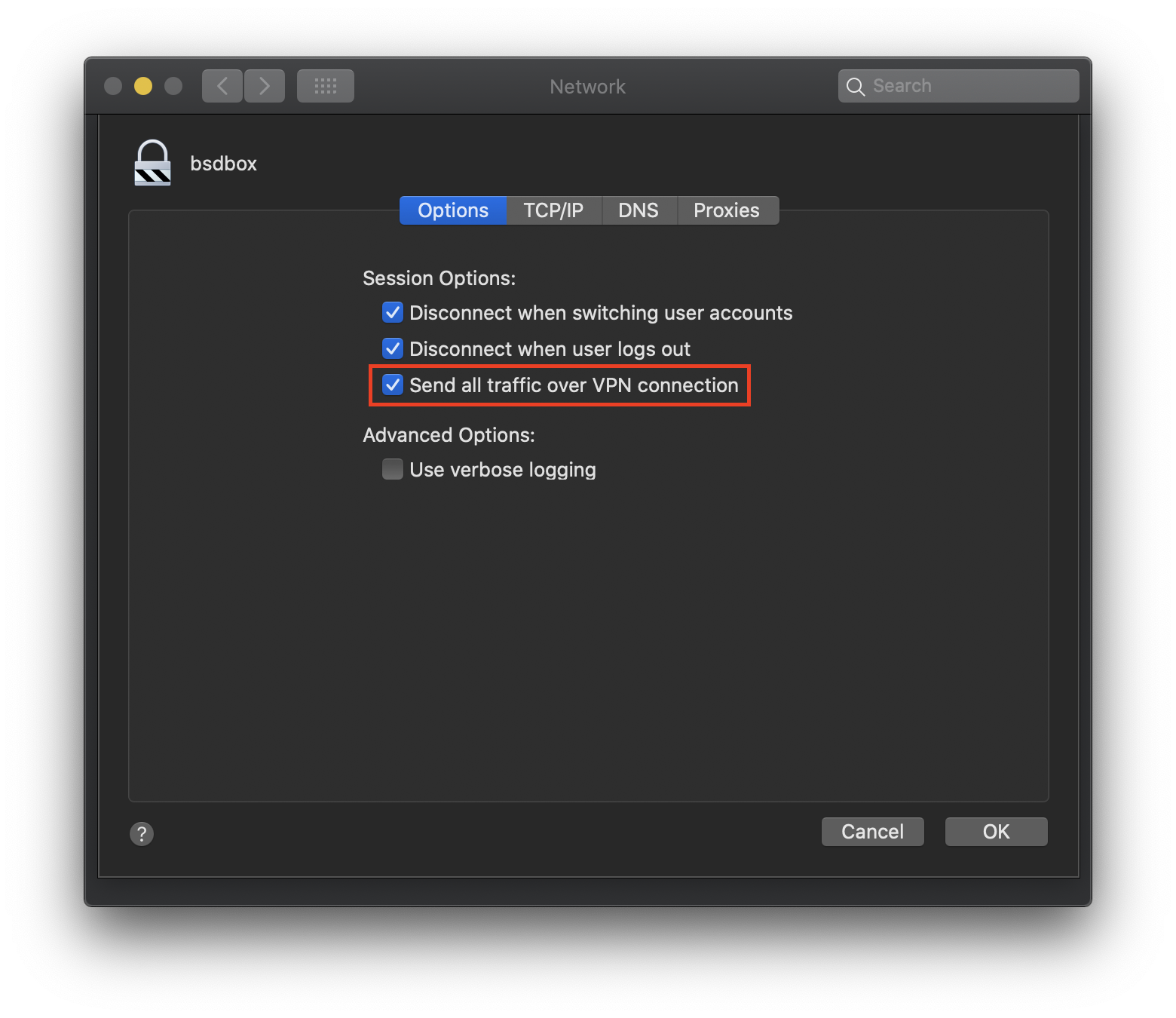 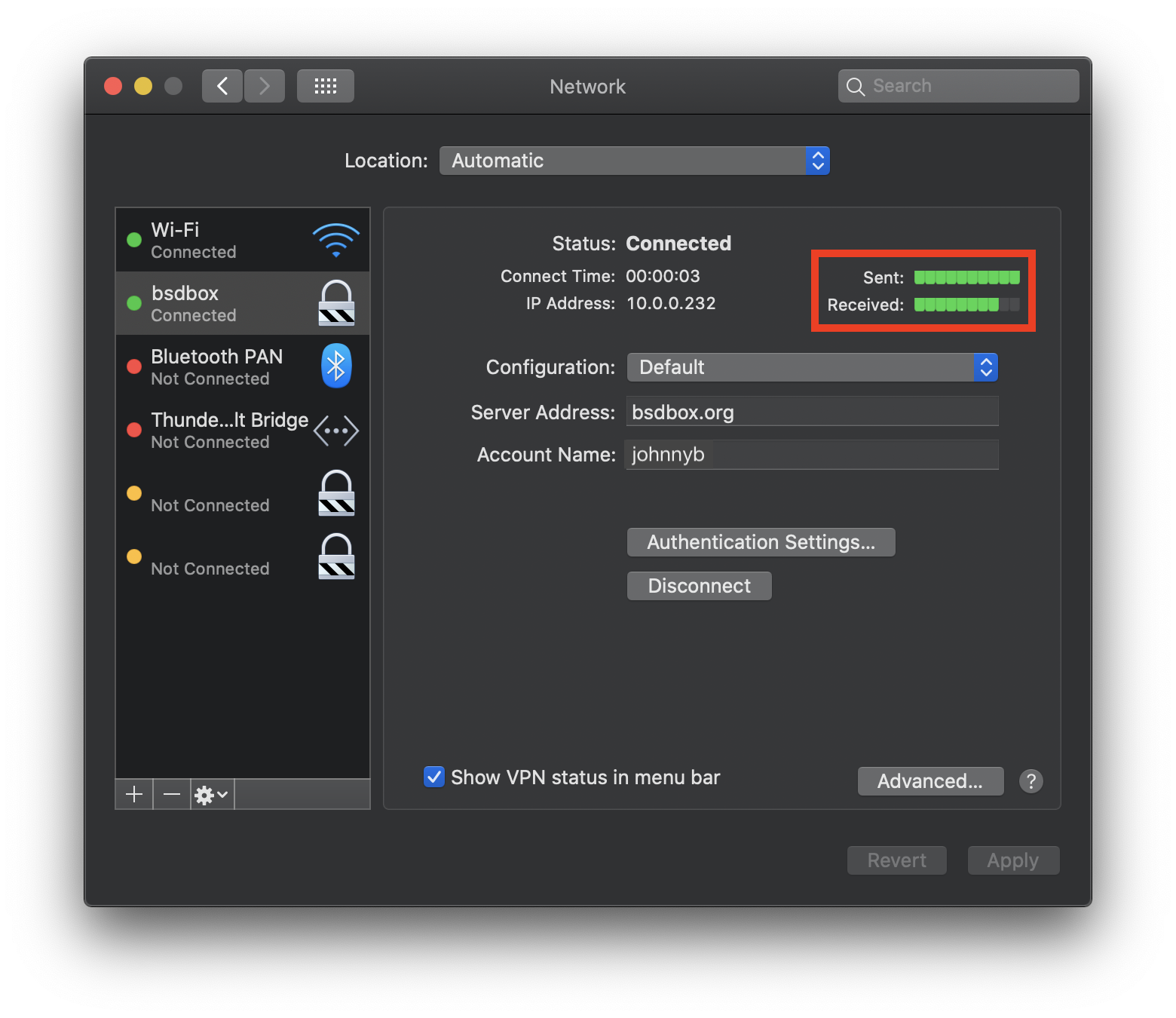 The status should now show Connected with the allocated private IP address shown underneath. To the right, two progress bars that turn green when traffic is being sent or received will be displayed (see: above screenshot).

On the server side, once a VPN session has been established, ifconfig will show the connected client on the pppx interface. Each established session will be assigned its own interface; that is, if multiple users are connected at the same time, ifconfig will display pppx0, pppx1, ..., pppxN.

iOS makes connecting to the VPN from an iPhone or iPad just as trivial. 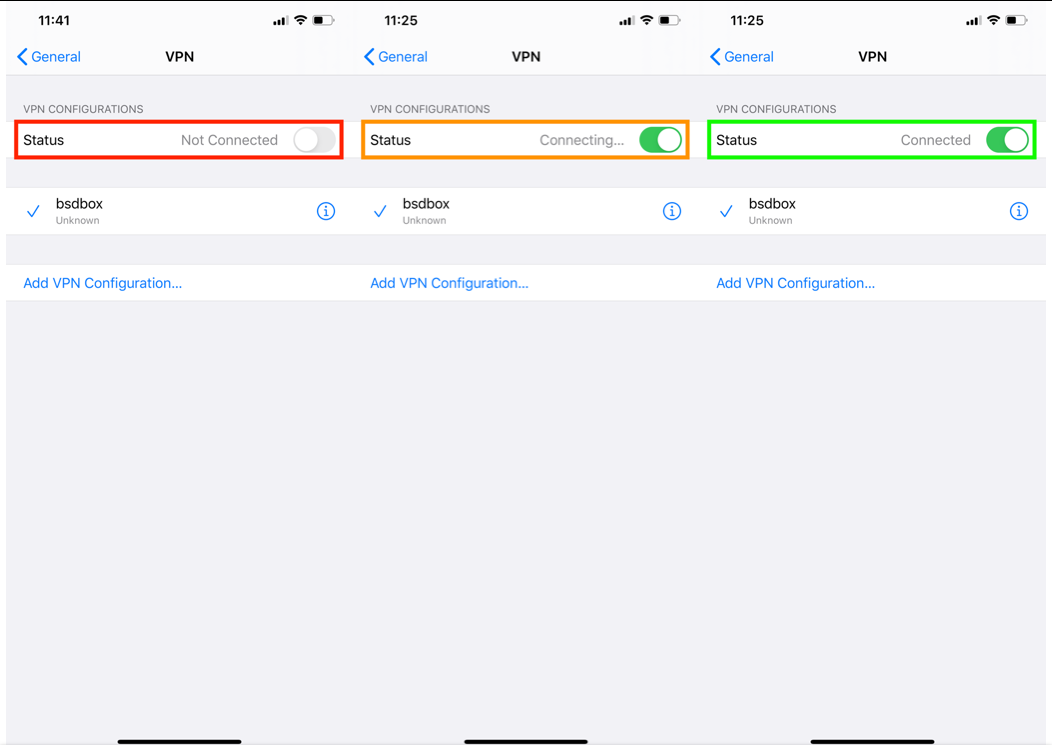 That concludes this short guide on how to establish an L2TP over IPSec VPN on OpenBSD for macOS and iOS clients. The base tools provided on every default install of OpenBSD make this a trivial undertaking, and the native macOS and iOS network tools are also intuitively simple. While this enables a more secure browsing experience by transmitting all traffic through an encrypted tunnel, DNS requests are still being resolved by Google's nameservers. For a truly private network, follow this guide to setup the local resolving name server unbound on OpenBSD, then check back soon for an upcoming article on how to route all DNS requests through the VPN to be resolved by unbound. This will include how to configure DNSCrypt as another alternative solution for preventing DNS leaks.