With my preferred Git repository hosting provider preparing to introduce some changes that don't cohere with my philosophical ideals, I finally decided to make the move to Fossil. Git has never been favoured but its ubiquity made it hard to ignore. The OpenBSD development of got was more than a desireable improvement but now that I needed to self-host, there was no longer an obstacle to using Fossil that could be avoided by staying with Git—and so I switched. Fossil is super simple, clean, and consistent—making source code management and version control easy. In the same vein, installation and setup is just as painless. On that note, the following presumes an OpenBSD 6.7 installation.

Use pkg_add to install Fossil; select the statically linked binary.

Because it's installed into the chroot, create a symbolic link of the fossil executable into /usr/local/bin (for using locally on the server; this can be avoided otherwise).

Create the file /var/www/cgi-bin/scm with the following contents to make the CGI script that httpd will execute in response to cvs.domain.tld requests; all paths are relative to the /var/www chroot.

The directory directive instructs Fossil to serve all repositories found in /var/www/htdocs/cvs.domain.tld while errorlog sets logging to be saved to /var/www/logs/fossil.log; create the repository directory and log file—making the latter owned by the www user, and the script executable. 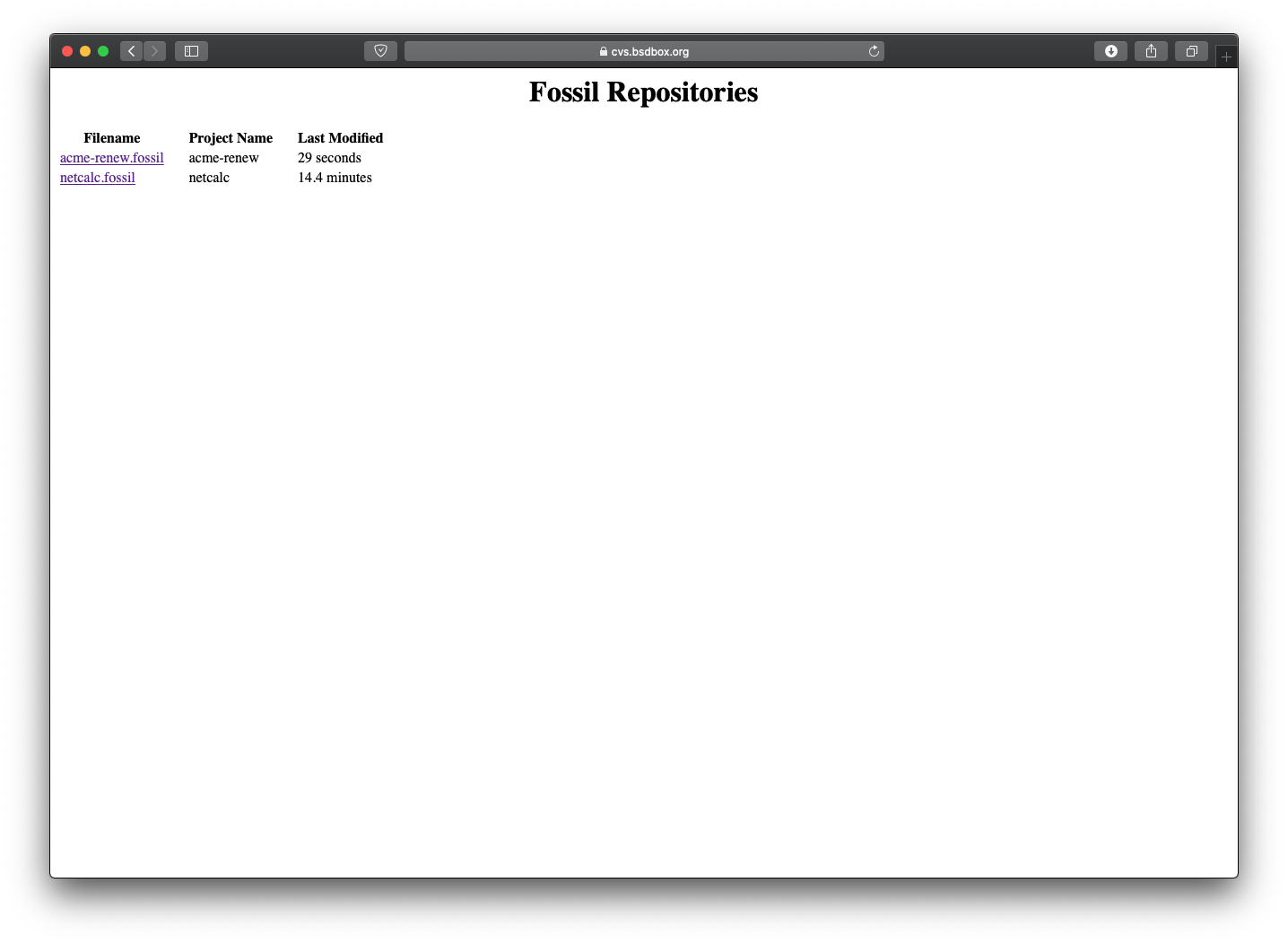 Fossil needs both /dev/random and /dev/null, which aren't accessible from within the chroot, so need to be constructed; /var, however, is mounted with the nodev option. Rather than removing this default setting, we'll build a small memory filesystem and then mount it on to /var/www/dev with mount_mfs(8) so that the random and null device files can be created. In order to avoid neccessitating a startup script to recreate the device files at boot, we'll create a template of the needed /dev tree to automatically populate the memory filesystem.

First, to make the mountable memory filesystem permanent, add the following line to /etc/fstab as a privileged user.

Then execute the following commands.

In this installation, we're going to grant repository directory ownership to the user who will push to, pull from, and create repositories. In addition, the same user that executes the fossil binary must have writable access to the repository directory specified above in the CGI script, which on OpenBSD is www.

Before starting httpd, ensure you have a zone record for the subdomain with your registrar or nameserver. Then follow this guide to get a free HTTPS certificate from Let's Encrypt using acme-client(1), ignoring the httpd.conf configuration, which has already been done here.

Once the certificates and key are in place, confirm the syntax of httpd.conf before restarting the server.

To facilitate creating new repositories and pushing them to the server, add the following function to your ~/.cshrc or ~/.zprofile or the config file for whichever shell you are using on your development box.

Now a new repository can be made with finit repo, which will create the fossil repository file repo.fossil in the current directory; by default, the repository user is set to the environment variable $USER. It then opens the repository and sets the user password to the $PASSWD environment variable (which you can either set with export PASSWD 'password' on the command line or add to a secured shell environment file), and the remote-url to https://cvs.domain.tld/repo with the credentials of $USER who is authenticated with $PASSWD. Finally it rsync's the file to the server before opening up the local repository in your browser where you can adjust settings such as anonymous user access and set other repository details. Thereafter, you can add files with fossil add, and commit with fossil ci -m 'commit message' where Fossil, by default, will push to the remote-url server. It's suggested you read the Fossil documentation; with a sane and consistent development model, the system is much more efficient and cohesive than git so the learning curve is not steep at all. 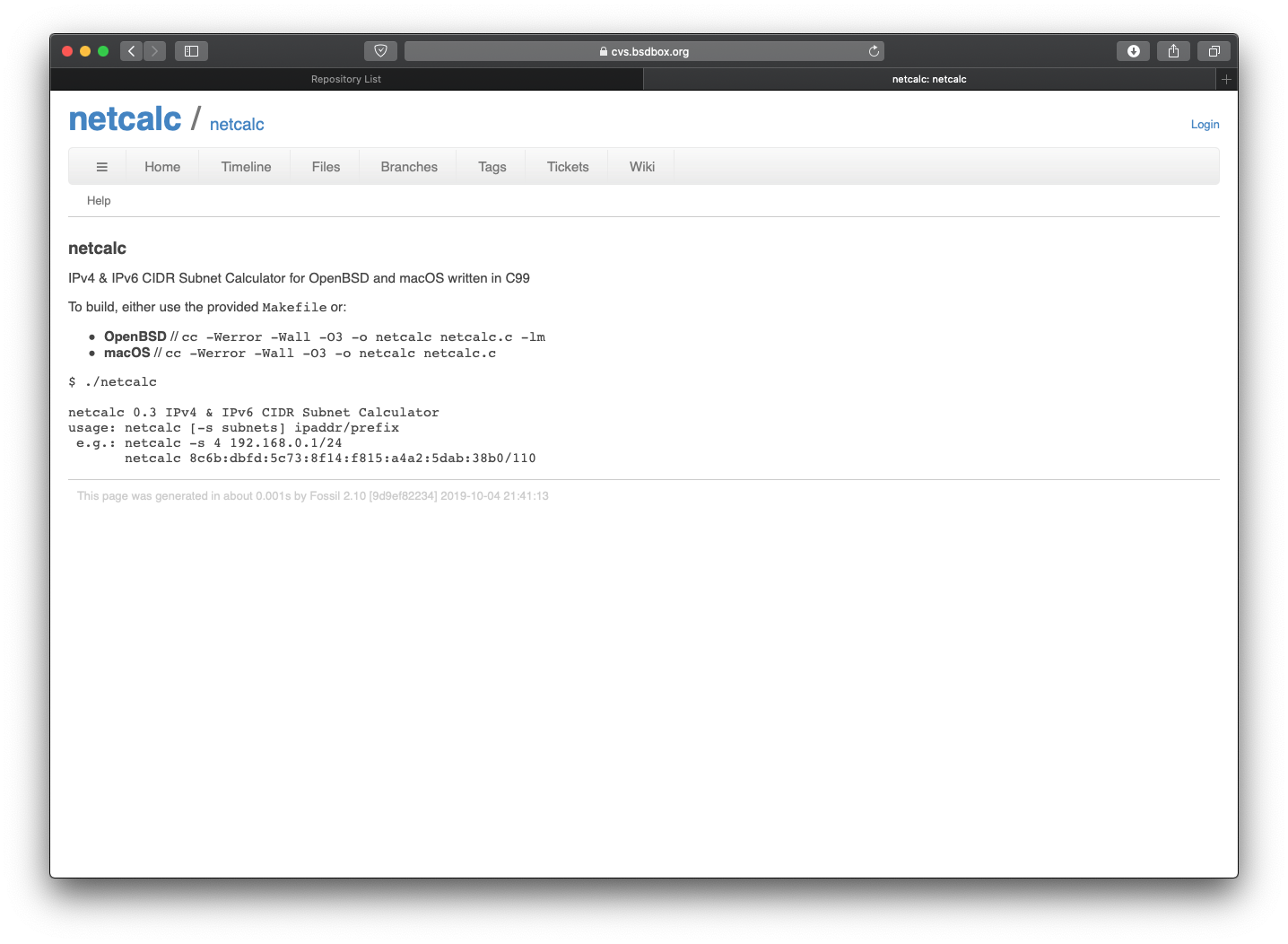